Message from the Director Learn more

Dr. JoAnn Kuchera-Morin, chief designer of the facility, composer, and media artist with over thirty filve years of experience in media systems engineering, outlines the vision for our research.

Welcome SIGGRAPH 2020 Community. All Packages and Media are available.

Etherial: A Quantum Composition & Installation featured at ISEA, Gwangju, Republic of Korea. Also can be viewed at the California NanoSystems Institute's AlloPortal and AlloSphere.

A repository of publications in the Media Arts & Sciences. Please contact Dr. Kuchera-Morin for more information.

The AlloSphere Research Group Our Team

The AlloSphere Research Group is open to collaboration and tours. 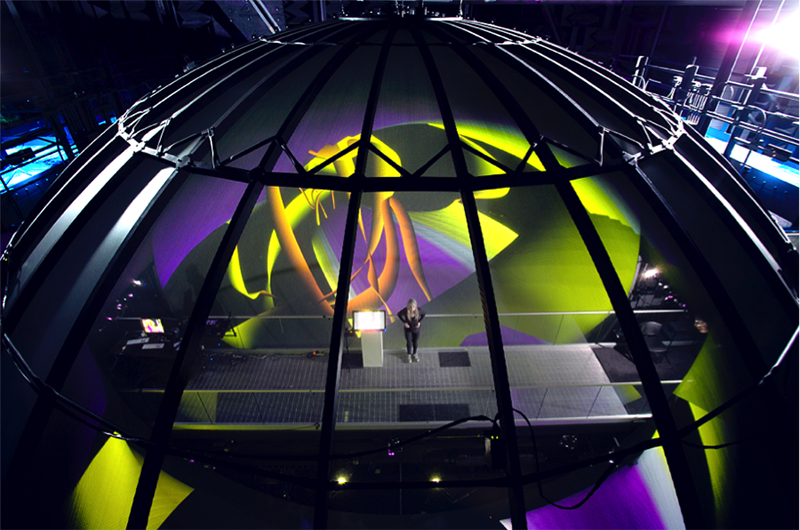 The AlloSphere is a one-of-a-kind immersive instrument that is the culmination of 30 years of Professor JoAnn Kuchera-Morin’s creativity and research efforts in media systems and studio design. It is differentiated from conventional virtual reality environments by its seamless surround-view capabilities, ability to accommodate 30 or more people simultaneously in a shared virtual world with no loss of self, and its focus on multiple sensory modalities and interaction.

Professor Kuchera-Morin worked with renowned architect Robert Venturi from 2001-2003 to plan the AlloSphere within the 62,000 square foot California NanoSystems Institute building (Elings Hall) at the University of California, Santa Barbara. McKay Conant Hoover, Inc. served as the acoustical consultant firm, while Auerbach and Associates were involved in the visual consulting process. During the extensive meetings with the architects and design consultants the construction plans for the instrument underwent many changes as nothing like this facility had ever been built before.

The AlloSphere instrument consists of a 3-story cube that is treated with extensive sound absorption material making it one of the largest near-to-anechoic chambers in the world. Standing inside this chamber is a 5-meter-radius sphere constructed of perforated aluminum that is designed to be optically opaque and acoustically transparent. High-resolution stereoscopic projectors are mounted unobtrusively below the bridge and above the walkway entrances, approaching eye-limited resolution and covering almost the entire screen surface. A multichannel loudspeaker system is suspended behind the aluminum screen to provide full-surround 3-D audio driven by real-time sound synthesis and spatialization. Computation clusters include simulation, sensor-array processing, real-time videoprocessing for motion-capture and visual computing, render-farm/real-time ray-tracing and radiosity cluster, and content and prototyping environments.

The AlloSphere can accommodate dozens of researchers concurrently. As you and your colleagues stand on the bridge of the AlloSphere, you will be immersed in scientific simulations, data visualizations, and artistic content.